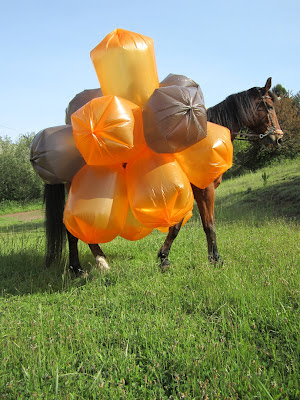 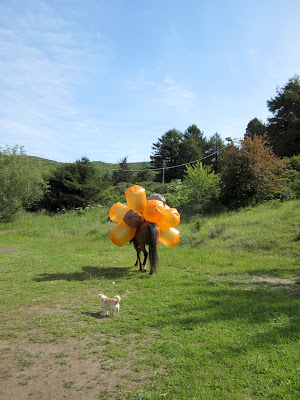 At the Presidio Riding Club, a brisk walk from my studio at Headlands, I found a new friend and collaborator in Kasanova - a charming chestnut steed and his rider / owner Tessa de Franco. Exercises with Kasanova was created during an afternoon of gentle rubbish bag inflation, as I attached each rubbish bag to Kasanova I maintained continuous narration and eye contact "Hi Kasanova I'm just passing Tessa this rubbish bag balloon to attach to your saddle..." During a series of exercises we added more bags progressing into a sequence of movements through the Marin landscape. Frequently ‘Bear’, Tessa’s pet pug dog, trailed Kasanova, becoming an unexpected participant in the work. Towards the end of the exercises we were stopped by an inquisitive park ranger wanting to learn about the project and talk about horses.

Rubbish Pendulum / Video / Brydee Rood 2012 The Waste Whisperer Series / Filmed at Recology Waste Transfer Station in San Francisco. There was something very emotional about this heaving, moving flux of garbage, this tide of materials. In any given moment there were commercial trucks dumping mammoth-heaps, individuals pulling in and fleetingly evacuating trunk-fulls of perished, forgotten deemed useless belongings… A small pile appears at my feet it’s riddled with the familiarity of someone’s lifetime – reduced to being rummaged over by one of the Recology workers deftly rescuing the best reusable bits. Two seconds later a ravishing mother load mass of steaming debris is quivering a few meters in front of me. A lively forklift shifts in for the take and like the reverse cutting of a birthday cake, makes off in hasty retreat with its newly shuffled mountain, leaving behind a vertical rubbish shelf jiggling before my eyes. The vision settles and I spy a single swinging object, the case end of a measuring tape dangling amidst the chaos, it's long arm of inches tangled far beyond reach, the tension and motion causing a pendulum swing, I was captivated! This brief encounter has become a short looping video and sound piece titled ‘Rubbish Pendulum’ a hypnotic meditation on waste. 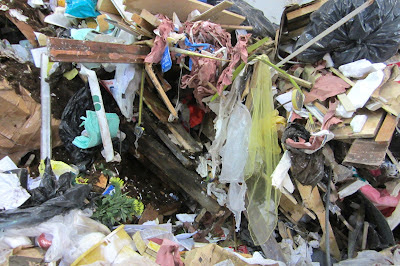 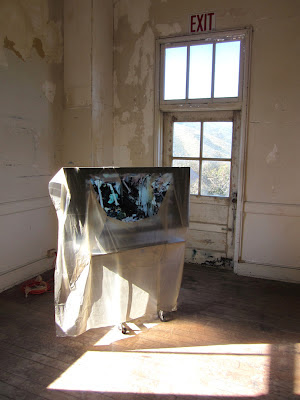 To be with you, to be free… / Installation / Brydee Rood 2012 The Waste Whisperer Series / Headlands Centre For The Arts San Francisco USA / Materials: Compostable and degradable rubbish bags, air, yarn, tape, rubber bands / This work was made possible with the generousity of Fulbright NZ and The Wallace Arts Trust / Bio Star rubbish bags kindly donated by Pitt Plastics USA 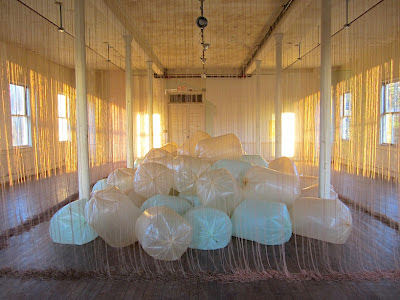 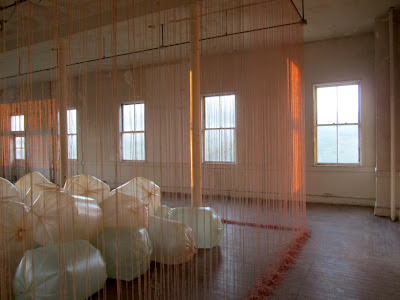 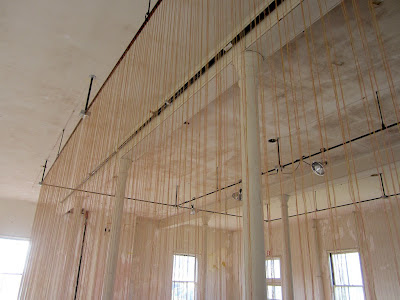 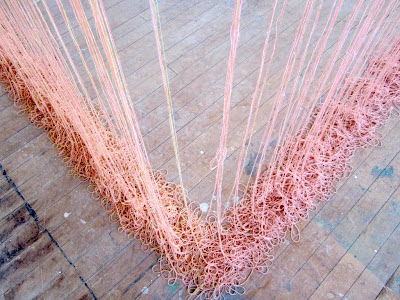 Across 3 weeks and 1 day, using 6400 strands of yarn, 800 pieces of tape and an uncertain quantity of rubbish bags and rubber bands in equal measure, I created this site-specific installation at the Headlands Centre For The Arts during the Spring Artist in Residence program. Spinning and catching the air I inflated each rubbish bag, up and down ladders drizzling the falling yarn in a neutral palette and subtly changing each section to reflect physical nuances (pale old mint greenish paint peeling over the wall in the corner, generations of brown stains trod into the wooden floor, pinkish tones fading across the patchy wall surfaces...) within the site and the wider headlands environment. To be with you, to be free… was spatially aligned to channel the setting sun as it flowed in the west facing windows. To end this installation I opened all the sash windows in the room to let the wild Headlands wind blow through, gracefully disheveling my work. The precarious nature of ideas balanced within a delicate structure, articulating something fragile and unknown, blown free by the elements. It was air that filled the inflated rubbish bag balloons and air that buffeted and billowed the installation to its end. Perhaps To be with you, to be free… also speaks to the complex nature of human relationships, our materiality and our habitat. The final punctuation of the work - a single tangled mass of yarn, like a large full-stop at my feet. 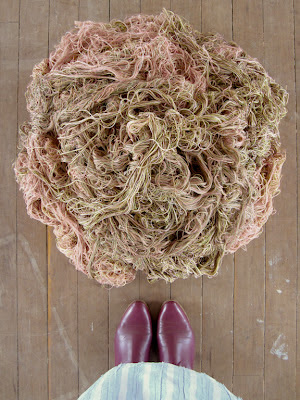 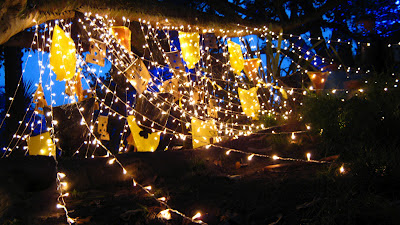 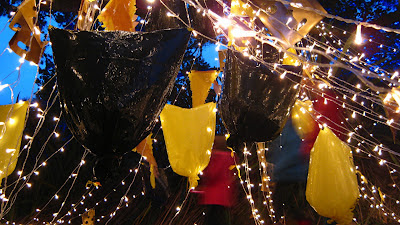 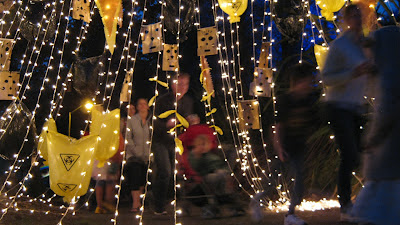 'The Find Another Way Barricade' / Brydee Rood 2010 was created and installed across a public footpath at Art In The Dark 2010 Auckland NZ / Materials: Wheelie Bins sponsored by Remondis and plastic LED hose lights. 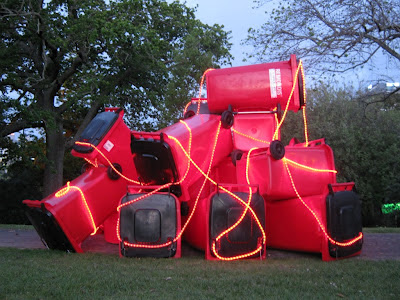 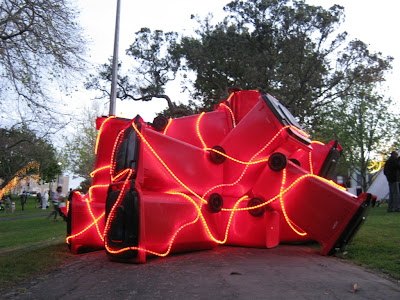 During the Sowing Seeds International Artist in Residence Camp at Gelawas Village, Rajasthan, India I developed the following 2 projects in my ongoing visual research series: For A World Without Waste. Many thanks to Sowing Seeds, the Kaman Art Foundation and the Asia:NZ Foundation. 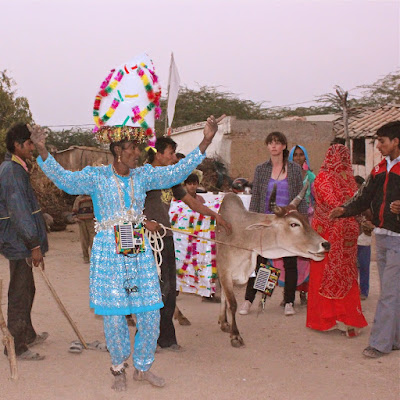 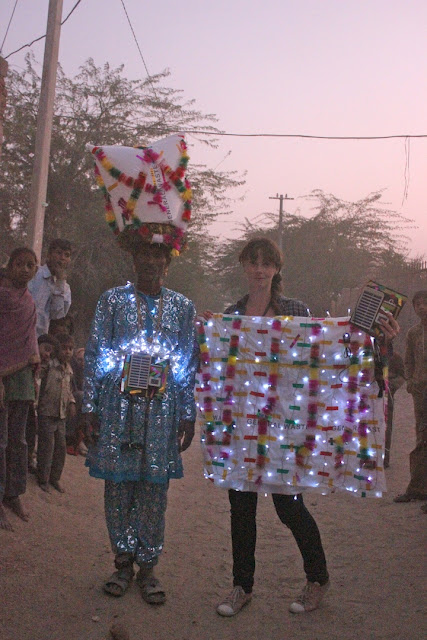 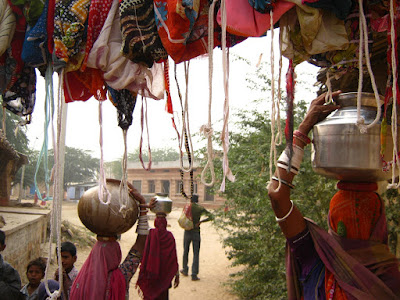 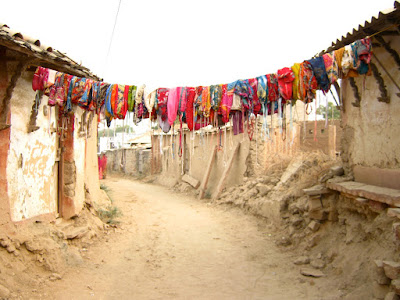 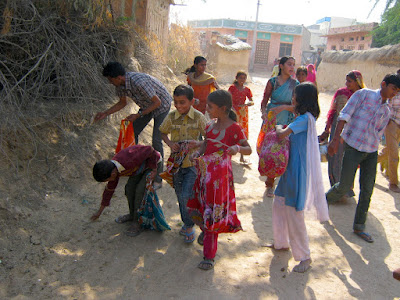 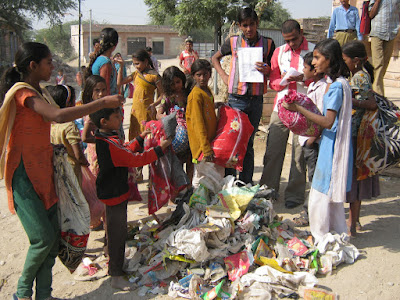